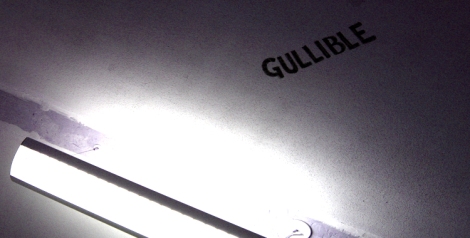 Despite what you might think, hornswoggle isn’t a made-up word or some fictional magic spell − in fact, it’s a bizarre sounding verb with uncertain origins dating back to the 19th century.

Put simply, to hornswoggle someone means to deceive or bamboozle them, or to pull the wool over their eyes. It’s true − we’re not trying to hornswoggle you!

If you’ve ever fallen victim to the classic “gullible is written on the ceiling” gag, it was likely someone’s attempt to hornswoggle you. Or maybe you’ve been duped by an elaborate April Fool’s joke, in which case you could say you’ve been hornswoggled. Alternatively, if you’re the one often playing the role of prankster, you might be a hornswoggling pro.

Hornswoggle is also the adopted moniker of American professional wrestler Dylan Mark Postl. If you’ve mistakenly landed on this page looking for wrestling, we hope you’ve still learnt something new!

Example of ‘hornswoggle’ used in a sentence:
Having won the election based on a campaign of lies, the politician’s attempt to hornswoggle the public was a tremendous success.